From the viewpoint of her undergraduate classmates at University of Amsterdam, Gabby Rudenko might as well have been relocating to Siberia when she sought training in protein structure at the northern tip of the country, three hours away by train.

“All you can do there is ice skate,” was the general feeling, Rudenko says. But she knew different. The University of Groningen has a long, distinguished history in structural biology. And at the time, it was home to the only protein crystallography group in the Netherlands.

Rudenko was a chemistry student rotating through laboratories to find a PhD position. She was frustrated by the laborious trial-and-error process of site-directed mutagenesis to figure out how a large membrane protein pumped cancer-fighting drugs out of brain tumor cells, interfering with treatment. Her project advisor suggested that a more definitive and precise answer could be found by solving the protein structure.

For Rudenko, that was the beginning of a bucket list of research experiences that took her further afield. She has landed at University of Texas Medical Branch (UTMB) in Galveston, Texas, where she runs a lab that explores molecular mechanisms of synapse formation and function, and investigates potential new targets to treat neuropsychiatric disorders.

“We’re interested in the dynamic protein interaction network in the synaptic cleft,” she says, “which must contain the proteins that generate specificity between the hundred billion or so neurons in a human brain and the hundreds of trillions of synapses that connect these neurons into unique and specific neural circuits.”

Rudenko was born in San Francisco and moved to the Netherlands in her early teens. At age 18, she decided she wanted to do research to better understand mental illnesses on a molecular level.

“Our brain is what makes us ‘human’,” she says. “But when the brain loses its cognitive abilities, and the ability to express and regulate emotions and behavior, as can happen in mental disorders, society rejects them. “There’s so much stigma attached to mental illness, so much tragedy,” Rudenko says.

Rudenko finished her chemistry degree in the Groningen lab of Wim G.J. Hol. She eagerly accepted his offer to continue as a graduate student. Hol promptly took a new position at the University of Washington in Seattle, shortly becoming a Howard Hughes investigator, and Rudenko soon followed.

Rudenko finished her PhD from University of Groningen in Seattle. Taking occasional breaks from her thesis work there, she joined the Mountaineers, a local climbing club, and trekked up nearby peaks, including Mt. Rainier, Mt. Adams, and Mt. Baker.

In 1996, she accepted a postdoctoral fellowship in the x-ray crystallography lab of Nobel Laureate Johann Deisenhofer at University of Texas Southwestern Medical Center, Dallas.

Now she faced a new problem: No driver’s license. She had flunked her driving test twice, barely passing on the third time. In the Netherlands, she relied on a bicycle. In Seattle, she cycled and ran (with the Merck Index and the Handbook of Physics & Chemistry in her backpack to stay in shape for climbing). In Dallas, she would need to drive, insisted her roommate, who coached Rudenko behind the wheel on Seattle streets.

Just before leaving town, Rudenko bought a used black pickup truck (without test driving it, out of an abundance of caution given her new driving skills). She loaded up her bicycle and lab notebooks and set off on her first solo road trip.

She detoured to Bryce Canyon, Monument Valley, and the Grand Canyon. “I loved every moment! I kept emailing Hans’s assistant, ‘I’ll be one day later,’” she says. “Finally, they said, ‘Gabby, you need to show up now!’ I put the pedal to the metal and drove in a single straight shot from Arizona to Dallas.”

Once there, she was put to work on solving the crystal structure of the extracellular domain of the LDL receptor with Michael Brown and Joseph Goldstein, who had shared a Nobel prize. Despite a year of effort, her crystals refused to diffract. So she teamed up with future Nobel Laureate Thomas Südhof on a project closer to her heart, a molecule known to build synaptic connections in the brain.

She solved the crystal structure of the ligand-binding domain of the synaptic adhesion molecule neurexin 1beta (Cell, 1999). It was the first such structure in a large family of synaptic organizers, a molecule that other research teams would later implicate in autism spectrum disorder and schizophrenia. Then she returned to the LDL receptor. They had better luck this time, the structure revealing a mechanism for LDL release (Science, 2002).

“It’s a crazy story, but it was just so incredibly much fun,” she says. “In total, the LDL receptor took 6 years. It was an amazing time at UT Southwestern. Many people had won or went on to win Nobel prizes. We were on the 4th floor. The coffee maker was on the 4th floor. There were people all over the place doing experiments.”

With two major papers, Rudenko secured a faculty position at University of Michigan. “Hans asked me, ‘So what will you do now?’ I said, ‘Solve structures of proteins involved in the molecular mechanisms of mental illness.’ Hans looked very amused. ‘Now you want to solve structures of proteins that haven’t been identified yet.’ And he was dead right! At the time. Now things are different. Thankfully.”

Deisenhofer suggested simply starting with a broader neuroscience scope. Rudenko went to her first neuroscience meeting at Cold Spring Harbor. “They were all talking about neurons and circuits, but no one really mentioned proteins,” she says, “I remember thinking, what on Earth am I going to crystallize? Houston, we have a problem.”

But another colleague advised: “Follow your heart. If this is what you’re going to do, do it.” It worked. She soon secured NIH funding to solve structures of proteins involved in synapse development.

Four years later, in 2008, her decision felt vindicated when several research groups implicated variants of two molecules that her lab was working on, in autism spectrum disorder and schizophrenia.

“It meant real molecules and real pathways were disrupted,” she says. “It really meant these disorders are medical, and folks with them should have access to adequate treatment.”

In Michigan, Rudenko’s team solved the structure of neurexin 1alpha. It is a big protein (nine domains), and the structure suggested a more extensive role for the neurexin family than previously thought. The structure showed a series of domains on one side of the molecule all neatly aligned, as if oriented to recruit protein partners. 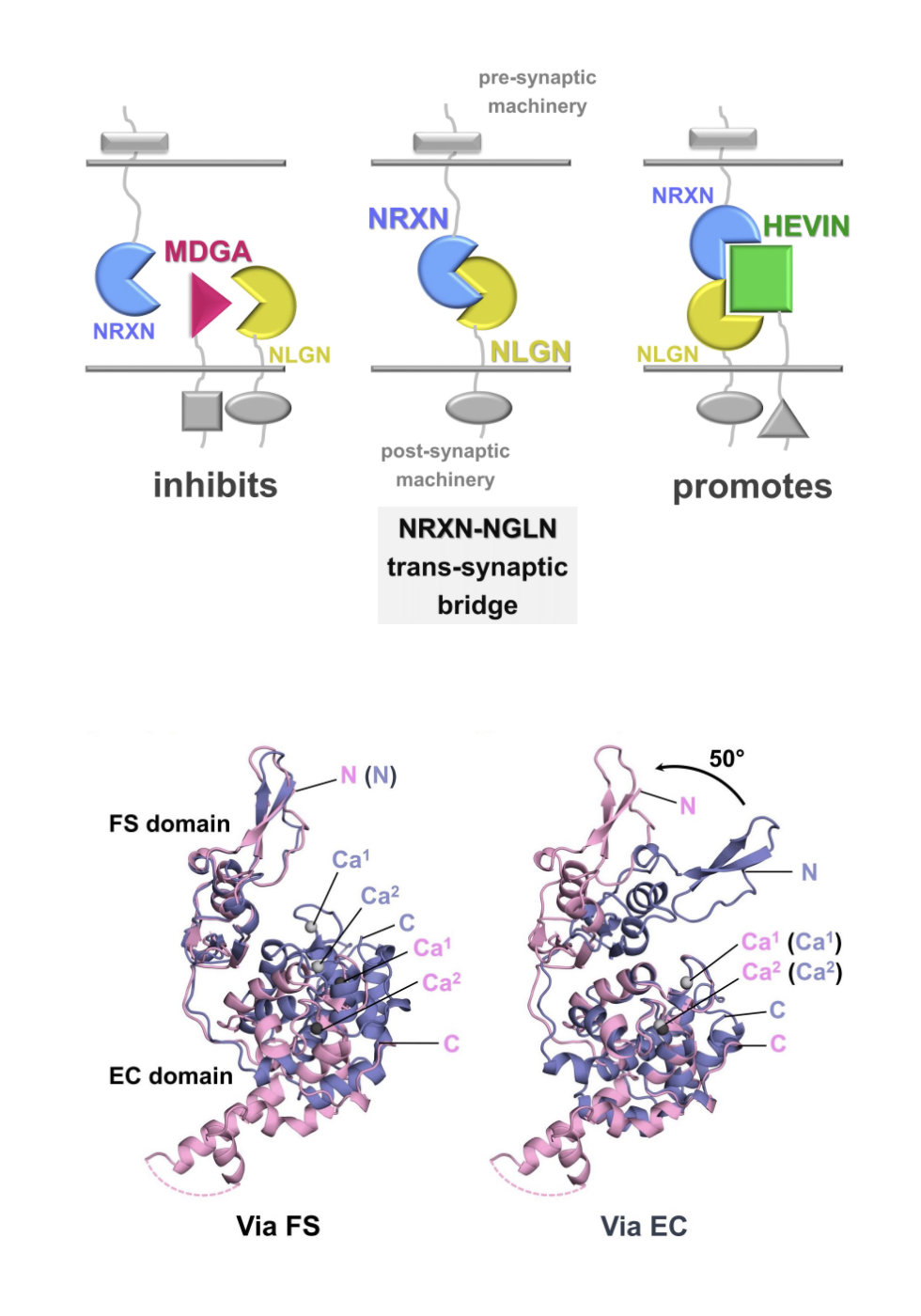 The 2009 structure of neurexin 1alpha (NRXN 1alpha) revealed an unexpected architecture well-suited to organize molecules in the synaptic cleft. The 2021 structure of hevin (below), a molecule released by astrocytes, uniquely works with select forms of NRXN 1alpha and one of its partners, neuroligin (NLGN), to promote the formation of trans-synaptic bridges that span and stabilize synaptic junctions. Image credit: Courtesy G. Rudenko

“When I started, people thought neurexins were just like Gorilla Glue, simply adhesion molecules” she says. “But their function is not purely adhesive. They must assemble what are almost ‘molecular machines’ that signal in ways not yet understood.”

Neurons talk to each other via their synaptic connections. There, rapid-fire signals are exchanged from one neuron to another. The action-packed space between neurons, at synapses, can contain a selection out of several thousand known synaptic proteins, Rudenko says.

Changes in protein interaction networks in the synaptic cleft can shape synaptic connections and ultimately neural circuits. Importantly, synapses likely help encode processes like memory, learning, and behavior; they can be altered too, for example in response to stress, drugs of abuse, but also medications.

“Synapses were once thought to be sort of a parking lot for proteins, but it’s a very dynamic place,” Rudenko says. “We know there’s an incredible amount of organization in the cleft; and things are also moving around in a coordinated way.”

In 2014, Rudenko returned to Texas. The Galveston UTMB campus was rebuilding after the devastation of Hurricane Ike and expanding its focus on structural biology through the Sealy Center for Structural Biology.

Much of the Rudenko lab’s work continues to focus on synaptic organizers, such as the neurexins and their partners, and their roles in fine tuning synapse development and function.

Astrocytes give the synaptic story plot a new twist. The glial cells make up to 80 percent of the brain mass. They can surround neuronal synapses and secrete proteins that can strengthen or disrupt interactions there, for example, under inflammatory conditions, and affect connections between neurons. Rudenko’s team has reported on the molecular underpinnings of an astrocytic protein that forms part of a regulatory trio that helps glue neurexins in a tripartite complex that spans the synaptic cleft (Structure, 2021).

“Ultimately we hope that understanding molecules like synaptic organizers can be leveraged to design novel therapeutics,” she says. “it’s a long road. We are very cognizant of that.”

One translational project in her lab focuses on substance use disorders. The Rudenko lab has combined their structural know-how in a multidisciplinary team with collaborators who are experts in psychiatry, neuroscience, medicinal chemistry, and pre-clinical research models to design probes to validate a potential therapeutic target for drug addiction.

It centers on a transcription factor in the brain that plays a critical role in drug-addictive behaviors in rodent models and has been implicated in people as well. Rudenko and her colleagues have put together a platform to screen and validate compounds as a first step in developing probes to interrogate its molecular mechanism and its usefulness as a novel drug target to treat addiction.

Despite the successes, academia can be a struggle. Rudenko credits “outstanding mentors” with advice and support at strategic points. “I only fully realized it later on, when I moved out from underneath their wings to start my own independent academic career, how unbelievably lucky I had been to have been able to work in their labs and have them as advisors,” she says.

With a similar philosophy, she and her family stepped up during the pandemic lockdown by volunteering for the Houston Food Bank. Houston has been reeling from the destruction caused by Hurricane Harvey, followed by the pandemic. In 2020, on Saturdays, Rudenko worked at one of the weekly neighborhood super site food distribution centers. More than 1,000 people worked the site that year, serving about 130,000 cars. “Truly some of the most amazing people I have ever met”, she says. “Houston Strong, Texas Proud!”

The increased demand—and food bank effort—attracted national attention, a visit from freshly elected President Biden and first lady Jill Biden in February 2021, and highlighted the need for policy changes to address food insecurity in the US.

The experience reinforced lessons from her scientific career. “For me, a thing I learned, is if you just step up and start somewhere, and after that take a next step, and after that step, another step, it’s amazing how far it will take you,” she says. “The problem is daunting. How do you get people better mental health treatment? People are stepping up. If people don’t get freaked out by how difficult the problem is and keep taking the next step and the next step, I’m convinced better treatments are on the horizon. That way, in future, people with mental illnesses (and their families) won’t have to suffer as much.”