The parents of Montserrat Samso could not have predicted the symmetry of her name and her future work as a scientist.

She is named for a large geologic structure near Barcelona where she grew up. The steep serrated slab of the mountain Montserrat stretches six miles long with multiple peaks, steep trails, and a monastery that shelters the Black Madonna, the patron saint of Catalonia.

A picture of the mountain decorates Samso’s office at Virginia Commonwealth University in Richmond, where she studies much smaller biologic structures. The Samso laboratory probes the atomic configuration of ion channels, protein gatekeepers of the charged atoms that pace hearts and flex muscles.

To lift a cup of coffee or pulse blood through the body, a nerve signal prompts a molecular cascade that triggers the receptor pore to open and release a flood of calcium ions into the cell. In the presence of calcium, other proteins snap to attention, binding in a formation that contracts the muscle. Then the calcium is quickly pumped back into its compartment and the system is ready for the next nerve impulse.

“It happens in milliseconds,” Samso says. “It has to happen for every heartbeat. It happens when you want to move your arm or pronounce the letter ‘A.’”

Ryanodine receptors (RyR) were named after a plant that makes the toxic molecule ryanodine to fight insects. The toxin was briefly deployed as an insecticide in the 1940s, until scientists discovered ryanodine receptors in human brain, where the toxin can create long-term problems, Samso says.

In people, mutations in ryanodine receptor channels in the heart can produce arrhythmia and cardiac failure. In skeletal muscles, altered forms of the channels can result in myopathies. Malfunctioning channels can also cause an uncommon but fatal surgical anesthesia side effect called malignant hyperthermia, Samso says. Operating rooms stock the antidote.

As may be fitting for a muscle-bound ion channel, the protein is huge, about 10 times larger than an average protein. More than 160 rare genetic mutations have been discovered. One risky variation of a cardiac ryanodine receptor recently was found in two Amish families, where it manifests in the late teens, causing unexpected death in several children when they were playing and running around.

But when the life-giving channels function well, it’s “very, very perfect machinery,” Samso says. “If you think about it, muscles give us freedom to go wherever we want.”

Growing up in Barcelona, Samso attended a school strong in math, physics and chemistry. She lived in walking distance of Parc Guell, a public park of gardens and architectural wonders. Her grandparents’ vineyard in the countryside was 8 miles from Montserrat. It may have been the splendid natural setting that inspired her to choose biology over chemistry as a major at the Autonomous University of Barcelona. She stayed there for graduate studies, first to specialize in biochemistry and then to earn her PhD in X-ray scattering techniques.

Her graduate work took her to the synchrotron at Daresbury Laboratory in the United Kingdom. As part of her PhD, she looked at proteins in complex with the SDS detergent used to separate and sort the proteins by molecular size in experiments. Scientists had speculated the unraveled protein strings were coated on all sides by SDS (the prevailing view), but she showed the SDS detergent beaded up at intervals on the long protein string

The detergent problem required a complementary technique, cryo-electron microscopy (cryo-EM). Then she tried cryo-EM to image fibrinogen, a clotting factor in blood, aiming to solve a three-dimensional structure. “But we did not know how,” she says.

The project stalled, but the challenge tantalized Samso. For answers, she turned to newsletters from Wadsworth Center in Albany, New York, which included updates from the lab of Joaquim Frank, an SBGrid member. There, she read about his new approaches to processing images from the electron microscope, especially cryo-electron micrographs, advances that would win him and two other scientists the 2017 Nobel Prize in Chemistry.

Samso realized single-particle cryo-EM was her next step. With CV in hand, she visited a friend from the synchrotron who was a postdoctoral fellow at Wadsworth. Her CV began circulating there, finding its way to Frank.

“He told me that my project to obtain the 3D of fibrinogen by cryo-EM was too ambitious—he was right!” Samso says. They stayed in contact, and a year later, in 1993, Samso obtained a grant from the Ministry of Education and Science in Spain for a fellowship at Wadsworth.

At Wadsworth, Frank gave Samso her choice of three projects. Seeking to start a novel project from scratch, she joined a lab with a newly arrived researcher and worked on a tiny molecular motor called dynein, a dimeric protein with two attached ball-shaped domains. It was even more challenging than she realized. The balls lacked symmetry and required her to play with randomized reference-free alignment and classification to determine its first low-resolution 3D structure.

She learned a lot from Frank and the other researchers, who held joint weekly lab meetings. “I liked his direct tackling of a new problem at its core, solving it, then moving onto the next limiting step, always at the edge, and being able to ‘round’ and publish the story at every step,” she says. “His clarity, and being able to communicate in simple terms, were also very refreshing.”

Samso encountered the ryanodine receptor later during her postdoc. She moved to Boston to continue the project as an instructor in the anesthesiology department at Brigham & Women’s Hospital with access to the cryo-EM instrument at Harvard Medical School across the street.

There she determined the molecular organization of the transmembrane domain, the gate that opened and closed for calcium to rush out (Nature Structural and Molecular Biology, 2005). Structurally, the gate was a near duplicate of the potassium channel first imaged by Rod McKinnon 7 years earlier, even though there was no similarity in genetic sequence.

Later, she figured out how the gate opens (PLoS Biology, 2009). Looking down on the pore, the four petal-like domains that create the channel open like a flower bud blooming.

In 2010, Samso moved to VCU. Her new lab had a new electron microscope across the hall for high resolution single particle imaging. 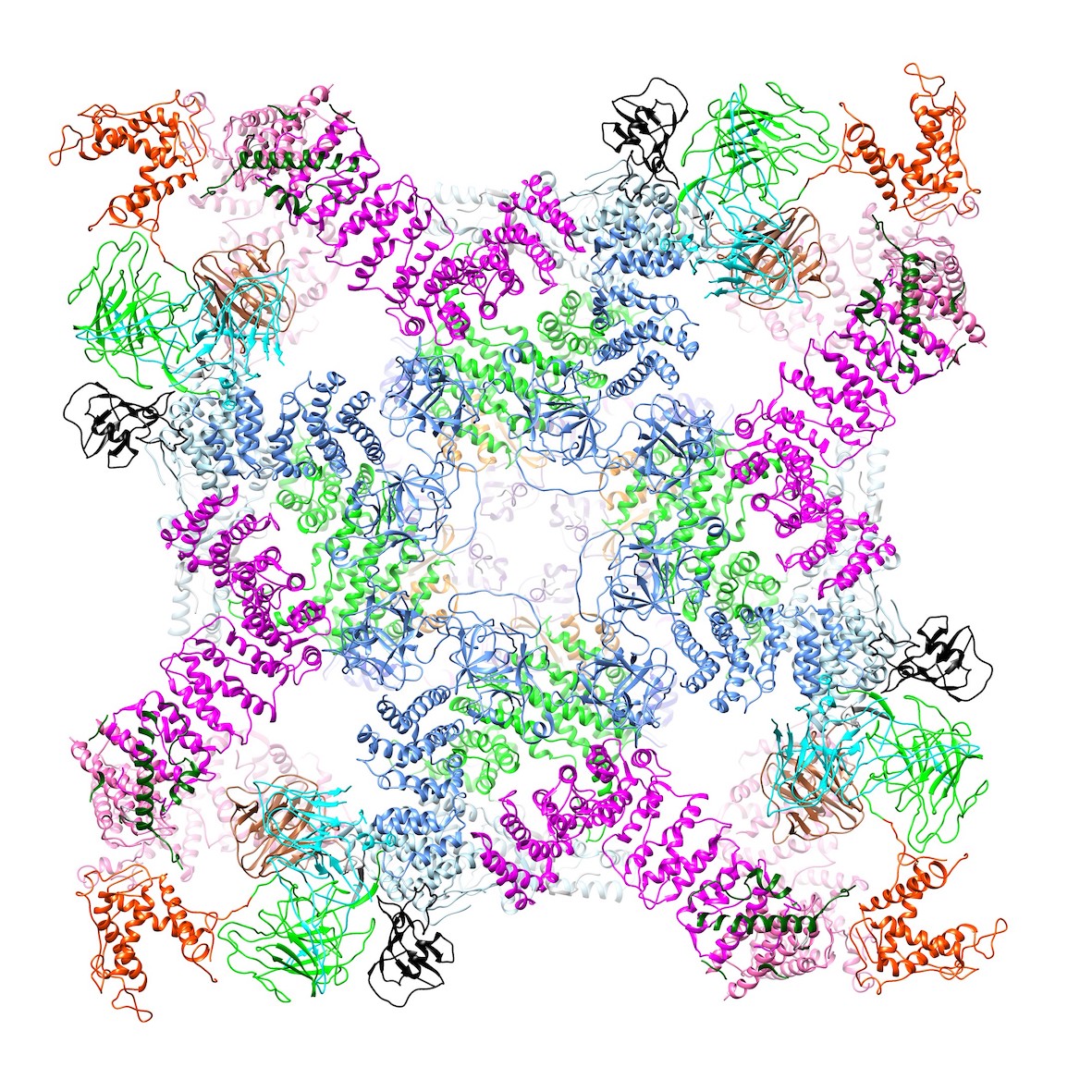 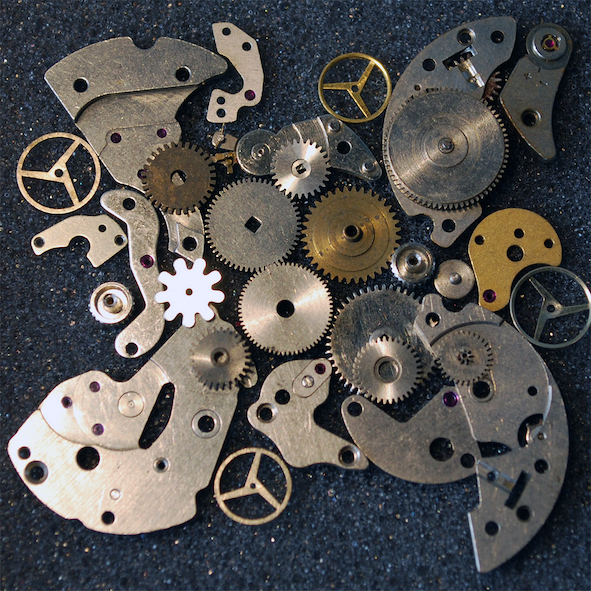 Two views of the ryanodine receptor, a large calcium channel with many pieces acting together to control the ion gate: The CryoEM-derived atomic model, with FKBP in black (top), and artistic interpretation, with FKBP in the Mercedes-logo-shaped pieces (bottom). Image credit: Courtesy: M.Samso

Then Samso’s team found how FKBP, a tiny domain in the notch between petals, normally works to stabilize and better coordinate the domains in the petal, allowing the channel to close completely.

“Opening isn’t the problem,” she says. “To close, the petals go up to keep the center closed. If FKBP is not there, it’s droopy.”

The group is following up with structures that contain human mutations to observe the altered structure and how this may affect gating. In one mutation in RyR that can cause malignant hyperthermia, the channel petals are droopy, not quite closing, changing the probability of opening and sensitivity to calcium. (Science Advances, 2020).

Samso’s team has teased out finer details of ryanodine domains with the increasing high-resolution close-ups possible with super microscopes. In another project, she is pulling back with a wider-angle lower resolution view to pick up more adjacent cellular structural information using averaging methods.

She is collaborating with a cardiologist on a model of cardiac arrythmia based on patient observation. She’s also working with departmental colleagues who do live cell imaging. The combined data and images will help put the ryanodine receptor in the context of the entire muscle.

In the model, a pacemaker is used to reproduce the arrhythmia phenotype. A mutation in the ryanodine channel can cause arrhythmia in people, but there may be a two-way cause and effect. The arrhythmia may be causing secondary problems that cannot be fixed by correcting the irregular rhythm. Samso and her colleagues have observed that the arrhythmia can alter the cellular structure surrounding the ryanodine receptor channel.

“It’s like a leak in the basement, and then you get mold,” she says. “You can fix the leak, but that doesn’t help clean up the mold.” The team wants to learn how to correct the problems the arrhythmia created.

“We know the macro problem,” she says. “We don’t know the consequences beyond the arrhythmia. The calcium reservoir has to be full to release correctly. What happens if the channel opens too soon? There’s less calcium, and it may make the heart beat a bit weaker. Or, depending on the timing, it could be too full, release too much, and create a beat out of time.”

Out of the lab, Samso enjoys the freedom her own ryanodine receptors provide, hiking and kayaking in the Adirondacks, trekking in the Himalayas, and paddling on multi-day trips in Wales and Scotland. And she returns to Catalonia to hike the Pyrenees and visit family living near her mountain namesake.