Hao Wu is a third generation scientist whose formative years were shaped by the Chinese Cultural Revolution. In fact, it’s fair to say the revolution, better known for persecution of academics and intellectuals, gave an unlikely boost to her future career.

Wu’s parents were physicists, and her grandfather was a chemist for the previous government. Her father’s older siblings had emigrated to the United States. It all added up to a family judged as enemies to the revolution. In Beijing, young Wu was bullied by her peers. Her parents were ordered to the countryside to farm rice and raise pigs. They sent Wu to live with her aunt in another town until they all returned to Beijing two years later.

Against that backdrop, school became more important, both as a retreat and for positive feedback, especially in math and science, at which she excelled.

Now at Boston Children’s Hospital and Harvard Medical School (HMS), Wu’s laboratory has added a new dimension to the way people think about the molecular signaling that fires up the immune system in illness and in health. 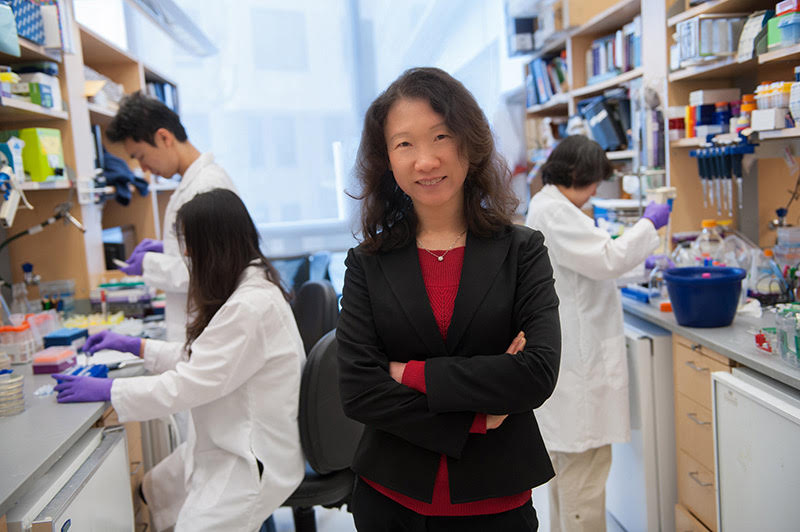 Hao Wu in her laboratory at Boston Children's Hospital.

Her interest in immunology began at Peking Union Medical College, where she landed in a lab that researched the autoimmune disease lupus. A lecture she heard by Purdue University structural biologist Michael Rossmann at a meeting in Beijing sealed her fate. X-ray crystallography seemed a perfect marriage of math and physics, with biological applications.

Wu joined Rossmann’s lab in Indiana and completed her PhD in 1992. She continued as a postdoctoral fellow in Wayne Hendrickson’s laboratory at Columbia University. By then, HIV/AIDS had become the leading cause of death for U.S. men aged 25 to 44 years and was on its way to becoming a global pandemic.

HIV/AIDS research greatly advanced understanding of basic immunology, and Wu’s project was no exception. The virus enters and destroys T cells after binding to CD4, which normally acts to help activate T cells to fight infections. Wu solved the full four-domain extracellular structure of CD4. In the process, she found the CD4 doubles up for binding, forming a dimer on the surface, forming a foundation for immune signaling.

In 1997, Wu started her own lab at Weill Medical College of Cornell University. Now she needed something to study and a long-term research plan. “I buried myself in the library,” Wu says. “What came to me was TNF, a cytokine whose intracellular signaling pathway was just being discovered.”

In her reading, Wu also found an intriguing link between TNF and a pioneering physician with a connection to her new workplace, once known as New York Hospital. In the late 1800s, William Bradley Coley experimented using bacterial infections to treat cancer, which is thought to be the original immunological cancer therapy.

No one knew how “Coley’s toxins” worked at the time, but decades after Coley’s death, researchers identified TNF as one of the immune responses that likely induced tumor cell death. The story reminded Wu of anecdotes she had heard growing up about people cured of their cancers by high fever or infections.

At Weill, Wu and her technician began the long process of expressing proteins and growing crystals for their first project: A structure of the first step in the TNF signaling process. TNF binds to a receptor on the surface of innate immune cells, triggering the receptor’s tail inside the cells to bind TRAF (short for TNF receptor associated factors). The TRAF family were the major signaling proteins for TNF receptors, but no structural information was available at the time.

A postdoctoral fellow soon arrived, and within a year they submitted their first paper to Nature. It was rejected.

“I was of course very worried,” Wu recalls. When she showed it to her postdoctoral advisor, Hendrickson interpreted the reviewers’ comments: The TRAF2 structure is nice, but it would be nicer in complex with the receptor. Wu’s small team performed the work and resubmitted. The paper sailed through and was published in 1999.

“It is true you learn more about the protein in a complex,” Wu says. That was an understatement, she would soon learn.

Based on classical receptors, scientists have envisioned signaling inside cells as a chain of events, transmitting signals from the outside to the inside of cells. A receptor undergoes conformation change, leading to a signaling enzyme, second messenger, and then a cellular response.

But as Wu began to work out more details of TNF signaling, she found something quite different. The innate immune system acts more like a flash mob or a pop-up event. Many proteins come together in higher-order aggregates for specific purposes.

“For innate immune receptors, it appears ligand binding induces formation of large assemblies—including the receptors, the intracellular adaptor proteins, signaling enzymes, as well as substrates—all into these gigantic complexes which mediate both signal transduction across cell membranes and signal amplification,” says Wu.

The higher-order picture first emerged in efforts to obtain crystal structures of death domain proteins, which activate apoptosis if the TRAF2 cell survival process is inhibited. The first paper, published in 2007 in Cell, was a 12-molecule complex that finally yielded a crystal for collecting data.

Analysis of the data was equally challenging, because Wu and her colleagues could not find traditional symmetries to identify where one molecule ended and the other began. The lightbulb went off in trying to understand another death domain complex published in Nature in 2010. 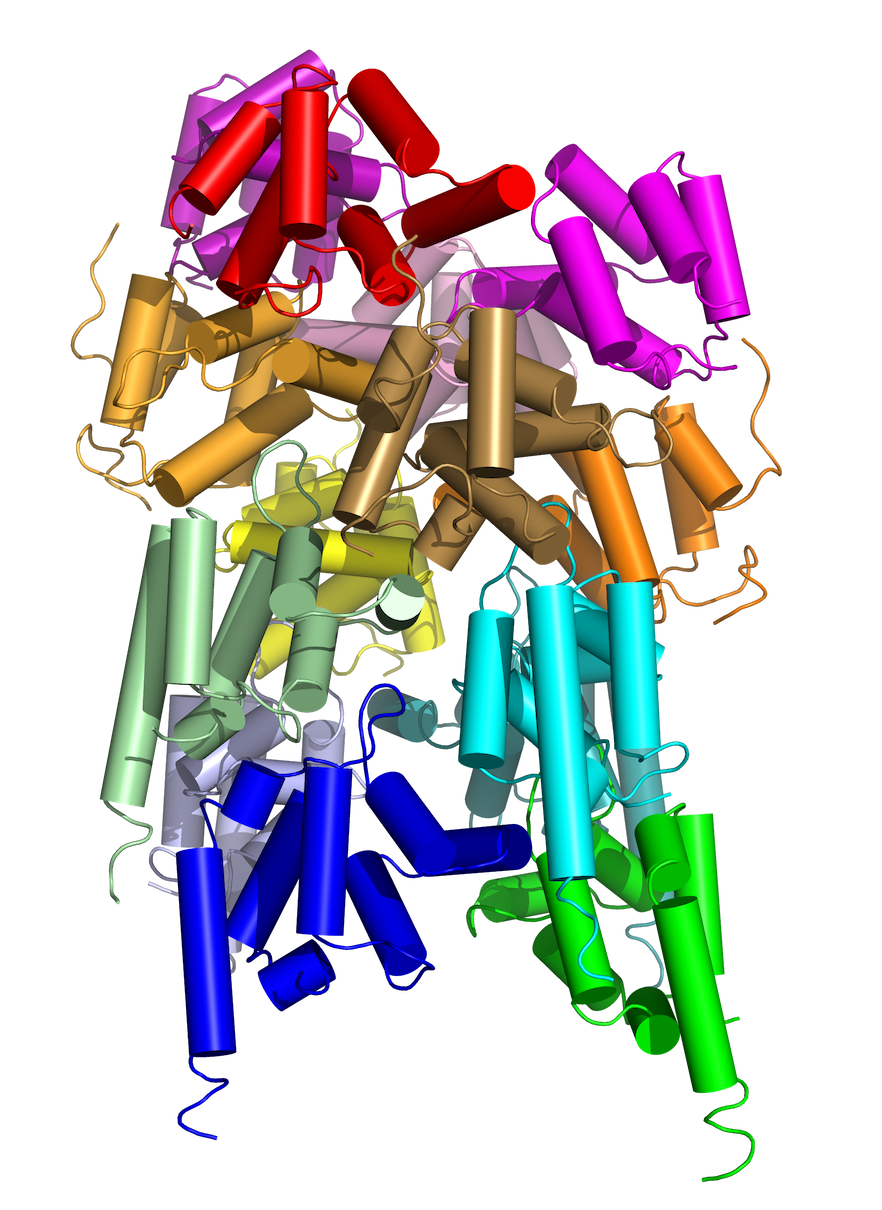 Crystal structure of a higher-order signalosome assembly, showing the formation using helical symmetry of a 14 subunit complex containing the death domain complex of 14 molecules. The structure, published in 2010 in *Nature*, triggered understanding of how proteins arrange themselves in similar helical symmetries to form long filamentous structures. [Animation].

“That was the point when we realized these proteins can all form assemblies through helical symmetry, like DNA,” Wu says. In other words, the working molecules spoon each other, some in spiral staircase formations.

The helical assembly opened Wu’s mind to other possibilities. Francis Chan at Duke University asked Wu’s lab to work on a necrosome they discovered, a protein complex that brings on a cell death of last resort, if apoptosis is inhibited.

The disordered protein sequences told her the necrosome complex wouldn’t crystallize. She saw hints of beta strands. Confirming her hunch, the necrosome assembled into a functional amyloid signaling complex composed of beta sheets, they reported in Cell in 2012.

Proteins that form helical assemblies often result in long filaments that could not make crystals. That launched Wu on a journey to learn electron microscopy (EM).

In 2009, she spent a short sabbatical in the HMS lab of Tom Walz working on single particles. In 2012, she approached multiple people about collaborating on cryo-EM. Finicky experimental samples were the death knell of an effort with Nikolaus Grigorieff at Brandeis University, also in the Boston area.

Problematic test samples almost torpedoed another collaboration on inflammasomes with Ed Egelman of University of Virginia. Then he took the samples to the Netherlands headquarters of Titan, makers of the transmission electron microscope.

“Suddenly we had a structure,” Wu says. “We couldn’t believe it. We were beginning to see the light at the end of the tunnel, that we can use cryo-EM to address these structures.”

In 2013, the “resolution revolution” in cryo-EM launched with a paper from the lab of Yifan Cheng at University of California, San Francisco. When the first author, Maofu Liao, was recruited to HMS, Wu grabbed the opportunity to set up some collaborations with Liao, completing her self-ordered training in cryo-EM.. “All the cryo-EM people were so busy,” she says. Now, Wu’s lab does most of the cryo-EM structural determinations themselves.

Wu takes a long view. “The reason most projects in my lab have worked is not from one person,” she says. “One person may have worked on it and hit a wall, and it dropped to the back burner. A new idea comes along. It could be the same person or another. There are lots of circular things going on.”

A 3-D depiction of a gasdermin pore shows how 27 identical units link together to form a ring that plays a critical role in the body’s inflammatory response (Nature 2018). [Animation].

Her lab is venturing into light microscopy to visualize the assembly of the higher order assemblies in time and space. In another direction, Wu wants to translate some of the structural insights into therapeutics. She and other colleagues at Harvard and elsewhere have formed a company called SMOC Therapeutics, referring to supramolecular organizing centers. “When I first started, I really just wanted to understand how these things work, how they come together,” she says. “As I grow older, the aspect of trying to do good for patients becomes more important.”