But to Buschiazzo, the risk was worth it. “Structural biology is quite underdeveloped in Latin America, from Mexico down,” he says. “So this was very exciting for me. It was a risk, but it was also a very high impact thing to try to do.”

With the help of strategic support from the Institut Pasteur and funding from Institut Pasteur de Montevideo, Buschiazzo brought in the equipment and expertise needed to build an X-ray crystallography facility. At any given moment, researchers from about twenty-five different labs across Central and South America may be using the facility. “Some groups are autonomous and just use our equipment to collect data,” says Buschiazzo. “But others need assistance from our technical staff.”

In undertaking the build-out of this facility, Buschiazzo risked losing focus on his own science. But that didn’t happen. Rather, since he came to Montevideo in 2006, he has broadened his studies from his earlier investigations into the basic science of bacterial signaling to begin looking at infectious pathogens relevant in Uruguay.

The work led him to collaborate with Otto Pritsch, a virologist at Montevideo investigating retroviral proteins. They published a 2015 Science paper — the first from the Montevideo Institut Pasteur — detailing the crystal structure of the capsid protein of the bovine leukemia virus, a retrovirus related to HIV. “This retrovirology collaboration will be an important part of our lab’s future work,” he says. 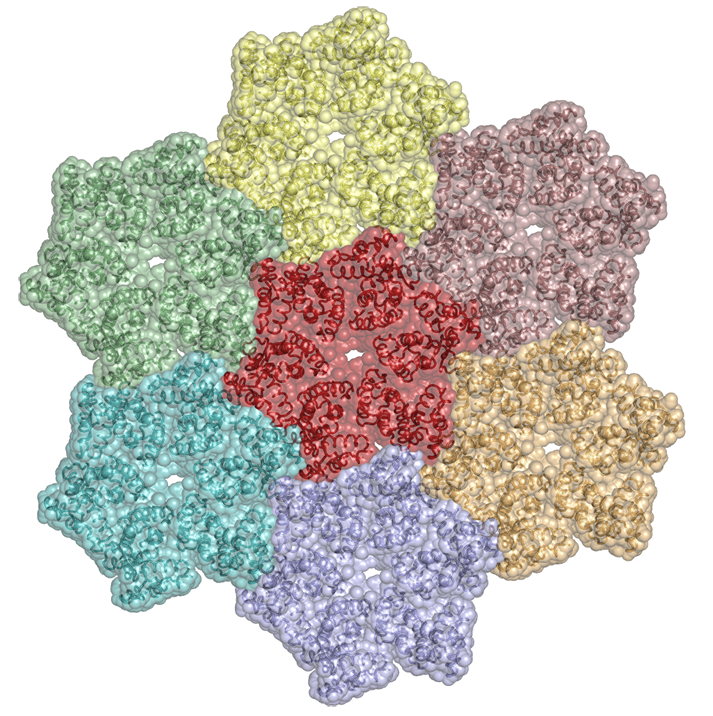 A hexameric building block of the capsid of the Bovine Leukemia Virus. A few hundred of these hexamers pack sidetoside in real life to form a huge supramolecular assembly that resembles a soccer ball and protects the genomic material of the virus within. Buschiazzo's crystal structure revealed the 3D crystal packing at high resolution, a first for any retroviral capsid.

Buschiazzo got his start as a scientist studying biology at La Plata University in Argentina and continued his graduate studies at Buenos Aires University. He first encountered structural biology there during studies of the pathogen Trypanosoma. He became interested in secreted disease-causing proteins and found that he needed to solve the structure of these proteins to find a way to block their activity.

To learn crystallography, he spent a few months in training at the University of California. He never got the proteins he’d purified to crystallize, though. “I was a rookie,” he says. “But I still learned a lot.”

In 1998, he took a post-doc position at the Institut Pasteur in Paris, the original Institut in what is now a global network with over thirty locations. There he solved the structure he was interested in earlier and also identified several new inhibitors.

When Buschiazzo moved to Montevideo, he continued this work but also expanded his research to include Leptospira, cork-screw shaped bacteria that primarily infect cattle, one of Uruguay’s primary exports. To study this pathogen, Buschiazzo has put together a multidisciplinary lab that includes a microbiologist as well as people with backgrounds in chemistry and physics. The team is working with strains of the bacteria harvested from the field, so a side result of his research is that concerned communities in Uruguay now know which strains are circulating, which helps inform vaccine developers in the area. “My work is important for society,” he says. “It is basic science, but it goes beyond.”

On the structural biology side, Buschiazzo’s lab is working to understand the signaling systems that are responsible for making these pathogens infectious. “We are combining genetics and structural biology, and knocking out kinases and response regulating genes to see if we can use them as targets against these bacteria,” he says.

The bovine leukemia virus collaboration further expanded his work. In addition, Buschiazzo recently joined the board of scientific advisors of SBGrid and his institution now houses a mirror for the SBDataGrid. As a result, he is part of two widely connected scientific networks: the Institut Pasteur, and SBGrid. “Politics are not always cooperative, yet scientists still find ways to work together,” he says. “I feel this is a good contribution.”